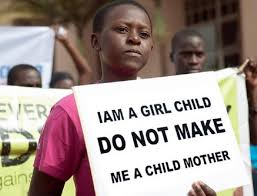 Being the first born of six siblings, I have experienced the popular adage of “leave it for the little ones to enjoy”. I kept asking myself, cant I also enjoy? Then the truth dawned on me, I can’t enjoy alongside my little siblings because my parents are not affluent and can’t provide for us all adequately. Well, how can I complain when my mother was pushed into child marriage and got pregnant as a teenager?

The Challenge of child marriage and teenage pregnancy have over the years been a canker which various governments who assumed office try to fight. In 1960, the total population of Ghana was about 6.7 million but has multiplied over four times to 29 million as of 2017.

However, in that same 1960, Spain had a population of about 30.5 and in 2017 their population was estimated to be around 46.4 million. Comparing Spain to Ghana, it is an undeniable fact that we have high rate of population growth. Now the question is: what has triggered high growth of population in this country?

In Today’s Ghana, it is popular to find young girls between the ages of 12-18 pregnant and loitering about the streets. While some struggle to make themselves productive by selling water, toffees, handkerchiefs, bread, dusters and others in dangerous traffic situations, the rest hide in their rooms out of shame and fear of public ridicule.

Ghana, all over Africa is known to be one of the many African countries engulfed in low education literacy, poverty both at regional and national levels, rate of unemployment and high mortality and morbidity if sky rocketing all in the name of child marriages and teenage pregnancies which is has brought such avoidable repercussions.

Teenage pregnancy and child marriage are cankers eating deep into the country’s coffers and contribute to large family sizes, which in turn increases consumption and reduce savings at both the family and National level thereby hindering National Development.

It should be noted that the calibre of people being discussed here are not of the working class so therefore, are not productive and hence do not contribute to the Family or national development in any way but rather create burdensome situation for family and the Nation at large.

If a large number of the population who do not belong to the productive class are dependent on the few working classes, how will our economy be stable when there is an imbalance between dependent population and working population? Gone are the days when the quantity of children one had, determines ones strength.

Today, to better our Nation, the best we can do is to make education the pillar for effective productivity from the younger population who are the future generation. With a sizeable population growth, we could increase our GDP, life expectancy, decrease access to health services, water and electricity.

We all need to be involved in fighting these cankers and the media, traditional authorities, religious leaders, parliamentarians, private sector, politicians, NGO’s and all must hold forces together to ensure that the vision of a sustained quality of life for all Ghanaians to see the light of day.

The writer is an officer of the Information Services Department (ISD) and the Head of Public Relations- National Population Council.