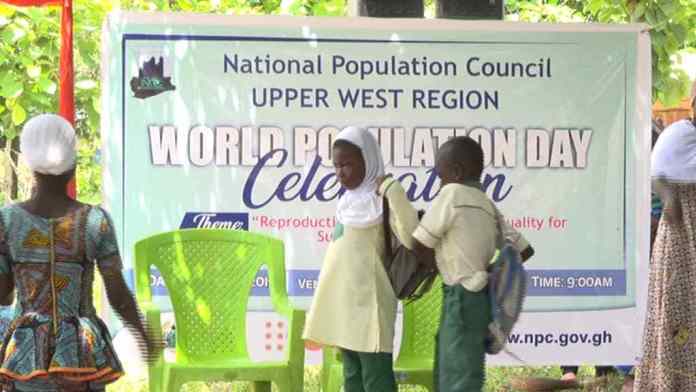 The region is also recording high maternal deaths, infant and under five mortality rates of 37 and 52 deaths per 1,000 live births respectively.

These were contained in the 2017 Maternal Health Survey.

The Upper West Regional Population Officer, Abu Salifu disclosed this at the celebration of World Population Day at Siriyiri in the Wa West District.

Mr. Salifu explained that the factors identified “coupled with the inability of majority of our women to fully participate in important decision taking at both the regional and national levels is a source of concern for sustainable development”.

The World Population Day was first observed in 1989 after the world’s population hit 5 billion in 1987 which was said to be alarming. The global celebration this year focuses on “International Conference on Population and Development at 25; The Unfinished Business”. Ghana meanwhile adapted the local theme “Reproductive Health and Gender Equality for Sustainable Development”.

The Upper West Regional Population Officer Abu Salifu described the themes as apt saying “the themes remind us of the Program of Action at the 1994 ICPD in Cairo where the international community reached a consensus on the reduction of infants, child and maternal mortality”.

Mr. Salifu called for the mainstreaming of family planning services for Ghanaians particularly those in the Upper West Region.

The Upper West Regional Minister, Dr. Hafiz Bin Salih in a speech read on his behalf expressed worry about the continuous rise in teenage pregnancy in the region. He disclosed that “in a research by the Ministry of Gender, Children and Social Protection, between 2012 and 2013, the region recorded the highest (15 percent) of teenage pregnancies.” Dr. Bin Salih added that “the region [Upper West Region] however placed second to the Upper East Region with 13 percent in 2016.”

The Minister averred that teenage pregnancy is a major challenge because “girls who become pregnant go through extreme pressure from family and community members to marry hence curtailing their ability to continue with their education or other chosen vocational careers”.

Dr. Bin Salih said there is a need for society to further uphold the views, rights and privileges of women. “Men should treat women with respect and give them space to participate in decision making starting from the household level. This should include decisions about childbearing,” he stressed.

The Wa West District Health Directorate used the occasion to educate the residents of Siriyiri on the importance of family planning.